Laws, History, Scoundrels And A Road

What is a land patent without a way to reach it? Worthless.

Did you know that “legal access” is a scam term that has nothing to do with your ability to get onto your land and enjoy it?

This is a cautionary tale about a road, the history of mining and mining law, and a bunch of scoundrels. All of them play a role in the mess we walked in on when we bought our mineral property.

At some point in the recent past, our neighbors (the scoundrels – who also happen to work for the county) began switching the lock on the gate to the road leading to our property – cutting off access to the previous owners.

These facts were concealed from us at the time we bought the land and beyond.

I believe the neighbors did it in order to have the run of the place – maybe help themselves to a little gold? You can see evidence of bulldozing from theirs onto our property via satellite. We also got a tip that they bulldozed our tailings but proving this might be difficult.

The previous owner apparently took a crap deal for a different route in before selling it and we were naive enough to believe access meant access.

That’s on us but only to a certain extent. We realized our mistakes early on only to discover things went much deeper than a matter of due diligence. In fact, our problems began over a century ago.

During the mid eighteen hundreds, America was still young and didn’t know what to do with all of the land it had “acquired”. The government also needed money in the form of gold so Congress came up with an idea: it opened up the public domain to citizens to settle and explore for minerals in exchange for land patents.

Those grants came with the implied right of access through Section 8 of The 1866 Mining Act which explains it all – kind of:

And be it further enacted, that the right of way for the construction of highways over public lands, not reserved for public uses, is hereby granted.

Because of its vagueness, this one-liner is behind over a century’s worth of litigation between private land owners, conservation groups, outdoor recreation advocates, politicians and counties. The law is generally referred to as R.S. 2477 or 43 U.S.C. 932.

It was repealed by The Federal Land Policy Management Act of 1976 but existing rights were preserved, with Congress’ intent being clear: when they enacted the 1866 law, it was to assure access to the patents they were granting at the time – otherwise, they would be worthless.

If only Congress had said something like “If you have a mineral patent, you have the right to get to your property and extract the minerals by whatever means necessary. This lasts forever, unless the government taketh away in which case they have to payeth you – amen.”

That would’ve been too easy. Instead, patents and related laws are filled with words like “appurtenances”, “trams”, “flumes”, “ditches” and “canals” to describe access rights. Who goes to work on or in a tram or in or on a canal for God’s sake? Apparently, you can do anything with confidence with a patented mining claim except get to it. The good news is that no one can take your right to access over an R.S. 2477 road without compensating you.

Very few people seem to be aware of this, however – including the title insurance company and every attorney we’ve consulted. They tend to see our property as strictly real estate.

So far, the rights associated with our mineral patent have not been taken seriously or honored and yet, if we were to sell them to a third party, the new owner would have the full weight of the law behind them and their right to enter onto our property and extract the minerals.

As it is, our insurance company just looks at us and shrugs when we tell them we need a road to our mine. Believing we have no basis for reasonable access, they maintain the position that a hiking trail is all the access we need.

Patented property is different from regular real estate yet one of their attorneys suggested they never guaranteed it would be easy to run a mining operation. They suggested that if the thieves that stole our camping gear a month earlier could make it up the hill, we should also be able to.

But the thieves didn’t have to carry gold ore in their backpacks which is apparently what the title insurance company expects us to do. 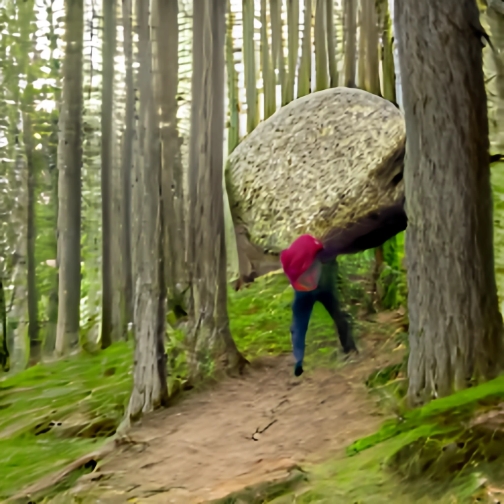 We need the road the title company missed in the title report. You know, the one the previous owners used for almost a hundred years before the neighbors changed the lock on the gate?

You know: the road the county HID from us?

Come to think of it, we can’t figure out how the insurance company even did a title search without the patent. The county claimed they didn’t have it and a lot of other records we requested.

Despite the can-o-worms we have in front of us, we got this.

We’re learning fast. We are methodical. We are patient. We will not accept the status quo. Please don’t underestimate us.

This road is ours and we will use it. We have a mine to open. 🙂